Press release I Brussels I May 2022

During the last week of April, researchers from the Tallinn University of Technology (TalTech, Estonia) and the Royal Belgian Institute of Natural Sciences (RBINS, Belgium) gathered in Han-Sur-Lesse and Ave-Et Auffe (Belgium) for a series of trials with the ROBOMINERS ‘RM3’ prototype. Alongside the RM3 trials which were conducted in an ancient mine gallery, the scientific teams also tested new types of underground 3D geophysical sensors. 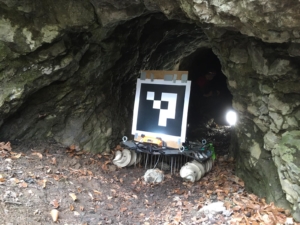 The EU-funded ROBOMINERS project aims at facilitating EU access to mineral raw materials – including those that are considered as strategic or critical for the energy transition – from domestic resources, and thus decreasing the European import dependency. To do so, ROBOMINERS is developing a bio-inspired robot for mining deposits that are small or difficult to access.

The Belgian test site is an 18th-century former baryte and lead mine gallery. The exploitation follows a vein-type mineralisation (Mississippi Valley Type deposit) hosted In Mid-Devonian limestones. This type of deposit with a highly concentrated, small-scale vein-type orebody is particularly relevant for ROBOMINERS’ small mining footprint and selective mining abilities.

The ROBOMINERS RM3 prototype is a lightweight (50 kg) locomotion/sensor testing platform built by the TalTech Centre for Biorobotics. Its purpose is the development and testing of ROBOMINERS’ subsystems, including propulsion, localisation, and environmental sensing, in field conditions corresponding to Technology Readiness Level (TRL) 5. In the meantime, a drilling tool which will be mounted on the RM1 prototype is being tested in the lab facilities of the Montanuniversity of Leoben (Austria). The first components of the RM1 robot are being manufactured and tested at Tampere University (TAU, Finland) and robot on-board intelligence is being developed at the Centre for Automation and Robotics (CAR) of the Universidad Politécnica de Madrid (UPM).

The prototype deployed in Belgium was equipped with a four-motor screw locomotion and an innovative “blind” localisation and sensing system: 48 tactile “whiskers” coupled with onboard inertial measurements units. Two miniature reflectance/fluorescence spectrometers completed the setup. A set of depth-cameras (one on the robot and one for robot tracking) were also used for visual localisation and mapping ground-truthing. The prototype and all its sensors are operated under a Robotic Operating System (ROS2) using three onboard computers and two microcontrollers.

In addition to the RM3 tests, underground geophysical measurements methods were also deployed in the mine. The teams used a 3D electrode mesh mounted on an aluminium frame scaled to fit the mine gallery and conduct electric resistance (ER) and induced polarisation (IP) tomography measurements. Two electrode designs were tested for bare stone/mud conductivity efficiency. 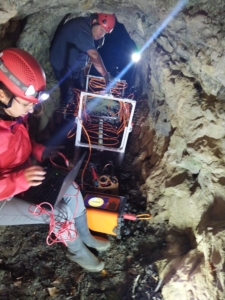 The trials were a great success, with more than 110 GB of sensor data collected during the campaign on several trial runs outside and inside the mine gallery. The ROBOMINERS teams currently review this data carefully. It will be invaluable to advance robotic designs for extreme mining environments.

To share more information on its research, the ROBOMINERS project is also organising a seminar on “Innovation in Selective Mining: new trends and technological advances to reduce the environmental footprint of mineral extraction“ which will take place on 8 June 2022 in Brussels.

Call for experts: Delphi Survey Round 2

Clustering with Pipebots and UNEXUP
Scroll to top
We use cookies on our website to give you the most relevant experience by remembering your preferences and repeat visits. By clicking “Accept All”, you consent to the use of ALL the cookies. However, you may visit "Cookie Settings" to provide a controlled consent.
Cookie SettingsAccept All
Manage consent