During April, May and June, the first ‘proof of concept’ experiment was planned at RBINS, to demonstrate the use of LIBS (Laser-induced breakdown Spectroscopy) to perform real-time diagnostics on drilling slurries inside the mineralogical module of ROBOMINERS.

LIBS (Laser-Induced Breakdown Spectroscopy) is an emission spectroscopy technique that uses high-energy laser pulses to induce a plasma from solid, liquid or gas samples. The plasma emits specific light wavelengths related to the chemical composition of the target material with specific spectral lines for each element contained in the plasma and thus in the sample.

Using a LIBS spectrometer inside a working robotic miner and process it in real-time to achieve some degree of selective mining presents many challenges. Being in confinement for an undetermined amount of time, I decided to move some equipment home to be able to continue prototyping hardware and software. It turned out that with a few basic tools and a desktop 3D printer, it is totally possible to keep busy for weeks testing and adapting as many setups as possible and comparing the results like in a real lab!

From mid-March to the end of April, I decided to focus on an experimental LIBS spectrometer that will be used to acquire libs scans of geological samples and cores. In the project, we planned to base this LIBS scanner on a full sized Computer Numerical Control (CNC) machine (ordered but not yet delivered due to the pandemic), as a backup solution, a small cheap CNC device served as a base for the first version of the scanner. During the 2 months of confinement, the small CNC was beefed-up with new motors, and a new custom “Z-axis” was designed from scratch and 3D-printed to fit the optical components (see the evolution of the LIBS scanner in pictures).

Evolutions of the ROBOMINERS LIBS scanner during March-April 2020

Powered by the open-source GRBL software, and a custom python script, the CNC allows a 1.25µm displacement resolution of the spectrometer head, with a repeatability that seems of a few microns (to be verified with SEM imagery later-on). One of the main goals of this experiment was to test a series of optical configurations to get the best signal from the sample, including a good UV signal collection in a so-called LIBS “co-linear” configuration. This configuration needs a custom optical part, a 45° pieced aluminium mirror. Unfortunately, after contacting the manufacturer, this kind of custom part could not be ordered, as the workshops were closed for an undetermined time. Another homemade solution was found, temporarily remounting the CNC to its original purpose and installing it in my kitchen’s apartment in order to drill a hole on a stock mirror as precisely as possible with a diamond bit. After hours of setup and tests, the result was not perfect but totally usable!

The first spectra acquired (a linear scan on Cu-Co ore sample lying around) are extremely promising, with an excellent signal in the UV (200-400nm), both in collinear and angular collection configuration (see spectra examples).

The next big step is to perform a 1D and 2D LIBS scans data treatment and produce chemical profiles and imagery of ROBOMINERS analogue samples. 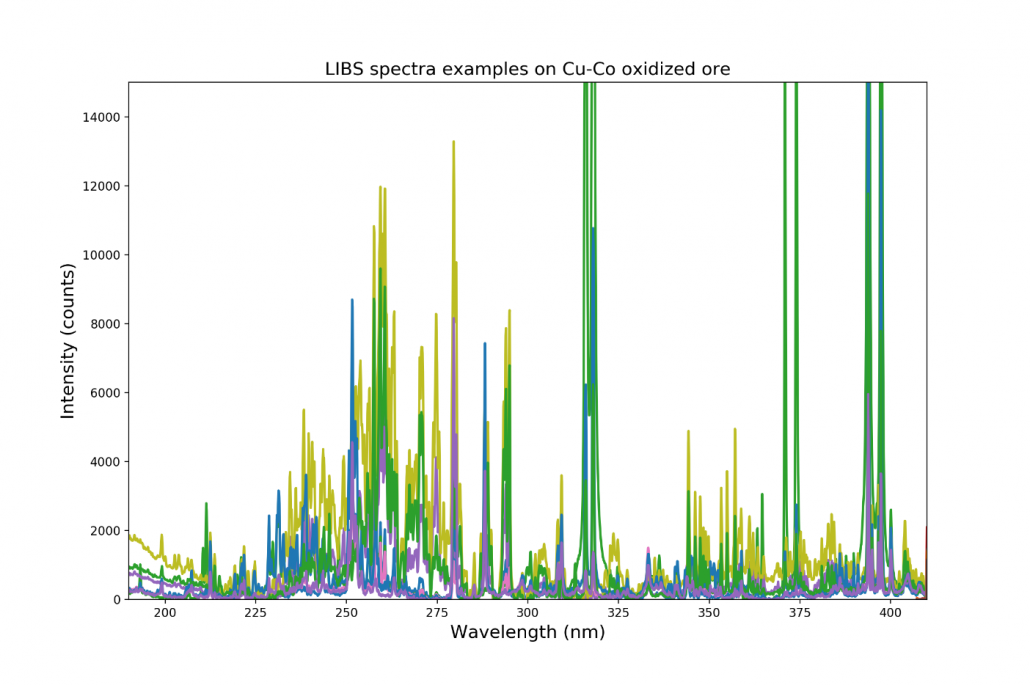 Global Robot Expo 2020
Scroll to top
We use cookies on our website to give you the most relevant experience by remembering your preferences and repeat visits. By clicking “Accept All”, you consent to the use of ALL the cookies. However, you may visit "Cookie Settings" to provide a controlled consent.
Cookie SettingsAccept All
Manage consent